Find a ServicePatients and PublicWork For UsGP And Clinicians AreaIn An Emergency
You are in:
Home/ About us/ Leadership/ Our leadership team/ Angela Gallagher 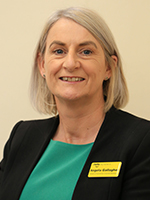 Angela Gallagher, who joined the Trust as Chief Operating Officer in early 2020, has extensive experience in nursing, operational and senior management roles.

Her long career in the NHS began when she left her home in Donegal, Ireland, in 1980 to embark upon nurse training in Essex, qualifying as a general nurse in 1983 and then as a paediatric nurse in 1986.

Angela took (very) early retirement in 2018 and after some time off undertook a project role back at MTW, as well as a number of temporary assignments, including six months at NHS England/Improvement from October 2019 to March 2020.

Before coming to the UK Angela worked as a barmaid and team manager for a ladies darts team.

She says her most satisfying role in the NHS (apart from her current role) was being a ward manager and having full control of how patients on her ward were looked after.

Is the Emergency Department the most appropriate place for your care?
15 Jul 2021