Find a ServicePatients and PublicWork For UsGP And Clinicians AreaIn An Emergency
You are in:
Home/ About us/ Leadership/ Non-Executive Directors/ Stephen Clark 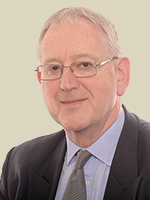 Stephen Clark was appointed as Chair on 1 April 2017.

Stephen is a retired investment banker who has over 40 years’ experience in Wealth Management, Investment Banking, Stockbroking and Fund Management. He has been Chief Executive of three significant financial institutions, Oppenheimer International, Gerrard Investment Management and Moscow Narodny Bank/VTB Capital where he became Chairman. He is a non-executive director of Nutmeg the on-line investment management business and Access Bank UK. He spent 27 years with the NatWest Bank Group and was a Managing Director and Chief Financial Officer at County NatWest.

His activities include, Chairman of Medway NHS Foundation Trust, Chairman Marshalls Charity (Church of England), Chairman 3H Fund, and Senior Adviser and Chairman of the Disciplinary Panel, Chartered Institute for Securities and Investment.

He is also a member of Henley Business School Strategy Board and acts as a business mentor under the London First Leadership Exchange scheme with the Metropolitan Police.

Stephen was Master 2011 of The Worshipful Company of Wheelwrights (chairman of the Battle Back Appeal and trustee of the Wheelwrights Charity) and a Past Chairman of The Broad Street Ward Club. A former Deputy Chairman, ABF The Soldiers’ Charity.

He has been a Territorial Army Officer and holds the Territorial Decoration. He is a Freeman of the City of London, a Liveryman of the Worshipful Company of International Bankers.

He holds the Order of Mercy in recognition of his significant contribution to ABF The Soldiers’ Charity and the Hero Medal from Help for Heroes for his work with Battle Back.

He was awarded an Honorary Doctorate from Canterbury Christ Church University for services to Higher Education and the community.

Membership of committees:
Nominations and Remuneration Committee
Integrated Audit Committee
The Chairman can attend any Board Committee at his discretion.
Contact Details: medwayft.trustsecretary@nhs.net
TwitterFacebookLinkedIninstagram

Is the Emergency Department the most appropriate place for your care?
03 Jan 2020