Find a ServicePatients and PublicWork For UsGP And Clinicians AreaIn An Emergency
You are in:
Home/ About us/ Leadership/ Our leadership team/ Dr David Sulch 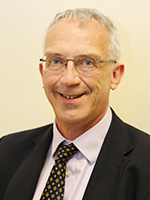 Dr David Sulch has been a consultant in Geriatric and Stroke Medicine since 2001. He joined Medway NHS Foundation Trust in January 2018 and became the Trust's Chief Medical Officer in September of that year. He formerly worked at Lewisham and Greenwich NHS Trust and its predecessor organisations. He has had a career long interest in medical leadership, and has worked on numerous key initiatives including Reforming Emergency Care and Hospital At Night. He was instrumental in the development of the Hyperacute Stroke Unit at the Princess Royal University Hospital in Bromley in 2010. His other major interests include mortality and medico-legal work. In his spare time he enjoys music and cooking.

Keeping you safe around our hospital building
19 Apr 2021