Visiting and appointments at Medway

Please remember that you should attend alone for any appointment at the hospital, unless you need a carer or are a child patient. All outpatients and anyone attending the hospital should wear a face covering at all times when in the hospital building.

Patient visiting has been reinstated on some wards, with conditions. Please visit this link for visiting arrangements on each ward.

Find a ServicePatients and PublicWork For UsGP And Clinicians AreaIn An Emergency
You are in:
Home/ About us/ Leadership/ Our leadership team/ James Devine 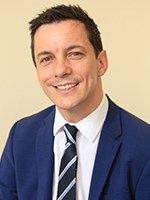 James brings more than 20 years’ experience of working in the NHS. He proudly started his career at Medway when he joined as an apprentice in 1996, working with the school health team. James then went on to work in some of the most challenging and prestigious NHS organisations in the UK, including South London Health Care, Barts Health and Great Ormond Street Hospital for Children, before returning to his roots in October 2016 to take on the role of Executive Director of HR and OD.

James was previously a Board member of the Healthcare People Management Association (HPMA) for London, supporting the development of Human Resources professionals across London and surrounding areas, and in 2015, he was the inaugural chair of the National HR network, bringing together the UK university teaching hospitals.

Over the past five years, James has been a regular speaker in the UK and internationally on leadership, improvement and employee engagement. He has a passion for leadership development, and the evidence based link between an engaged and valued workforce and better patient outcomes. James has had primary research published on diversity (recognised by the Global Equality Awards 2017), and is constantly seeking ways to improve the way care is delivered by learning from other NHS and non-NHS organisations to ensure good patient experience is fundamental in the way care is delivered. James has previously been a Chartered Advisor with the Advisory Board, an international organisation that uses a combination of research, technology, and consulting to improve the performance of health care organisations and educational institutions, and recently joined the NHS Confederation Leaders Panel.

Academically, he holds a Masters qualification, as well as having undertaken periods of study with the Open University in forensic psychology, finance, and strategy and performance, and in 2015, James undertook a period of study in the field of psychology with the University of Cambridge. He also holds chartered membership status with the Chartered Institute of Personnel and Development (CIPD).