Find a ServicePatients and PublicWork For UsGP And Clinicians AreaIn An Emergency
You are in:
Home/ About us/ Leadership/ Non-Executive Directors/ Jon Billings 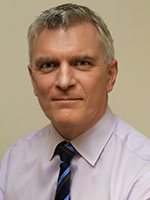 Jon was appointed as a non-executive director on 1 April 2017.

During a twenty-year career in the NHS, Jon was initially a diagnostic radiographer, then a communication manager, and subsequently managed a succession of clinical services including head and neck surgery, acute and specialty medicine and services for older people.

Jon was a founding director of the Irish health and social care regulator - the equivalent of CQC in England. While in Ireland, Jon ran various hospital inspection programmes and led several high-profile statutory investigations into serious patient-care concerns. He also developed Ireland’s first national standards for healthcare quality and safety.

Jon joined the General Medical Council in 2011, where he led work to develop and introduce medical revalidation. He was Director of Strategy at the Nursing and Midwifery Council and was closely involved in preparation for introducing revalidation for nurses and midwives, as well as revision of their Code of Practice and Behaviour. Since 2016 Jon has been freelance and worked on various national and local projects in the health arena.

Is the Emergency Department the most appropriate place for your care?
03 Jan 2020