Visiting and appointments at Medway

Please remember that you should attend alone for any appointment at the hospital, unless you need a carer or are a child patient. All outpatients and anyone attending the hospital should wear a face covering at all times when in the hospital building.

Patient visiting has been reinstated on some wards, with conditions. Please visit this link for visiting arrangements on each ward.

Find a ServicePatients and PublicWork For UsGP And Clinicians AreaIn An Emergency
You are in:
Home/ About us/ Leadership/ Our leadership team/ Richard Eley 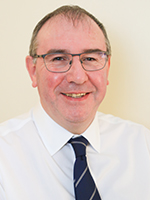 Richard was appointed as Interim Chief Financial Officer in April 2020.

Richard is a Chartered Accountant by background. After working in Practice in Cardiff, in what was Touche Ross and Co, and is now Deloitte, he moved to work with the NHS in Cardiff. His working life since then has been connected to health in some shape or form, though he has worked in the NHS, University and Charity sectors. He has nearly 30 years’ experience working as a Finance Director at Board level.

This is the first time that Richard has worked in Kent and despite the sad and difficult times that are being faced by the NHS, he is pleased to be a part of the management team at the hospital working for the people of Medway.

He holds an honours degree in Economics from the University of Cambridge. He is a Fellow of the ICAEW and RSA. In his own time Richard enjoys supporting rugby, gardening, theatre and spending time with his wife and son.