Find a ServicePatients and PublicWork For UsGP And Clinicians AreaIn An Emergency
You are in:
Home/ About us/ Leadership/ Non-Executive Directors/ Adrian Ward 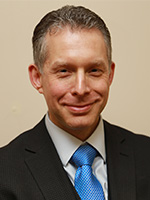 Adrian Ward was appointed as a non-executive director on 1 August 2017.

Adrian graduated from the Royal Veterinary College in 1996 and spent a number of years working as a small animal vet in the south of England. After leaving general practice in 2011, he worked for a pharmaceutical company as a Veterinary Advisor and developed an interest in the development of antimicrobial resistance and the strategies that can be used to slow this process.

A passionate advocate of responsible antimicrobial use, Adrian spent a number of years presenting on the subject and worked with professional bodies and key opinion leaders in order to develop educational materials on the subject.

Following the birth of his son in 2014, Adrian returned to small animal practice as a locum and began work as a Case Examiner for the Royal College of Veterinary Surgeons in their professional conduct department, later being appointed as a Chair (Fitness to Practice Panel) for the Nursing and Midwifery Council in 2017. He continues to promote responsible antibiotic use and infection control strategies through his work with the British Small Animal Veterinary Association and Bella Moss Foundation.

A keen amateur triathlete, photographer and software developer, Adrian has rapidly discovered that being a father to a toddler leaves little room for hobbies and that his DIY skills need to improve dramatically if his gadgets are to remain safe from little fingers.