Find a ServicePatients and PublicWork For UsGP And Clinicians AreaIn An Emergency
You are in:
Home/ About us/ Leadership/ Non-Executive Directors/ Sue Mackenzie 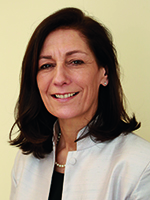 Sue Mackenzie was appointed as Non Executive Director in January 2020.

Until recently Sue was Operations and Business Transformation Director for P&O Ferries. Responsible for all operational matters, as well as 2,500 staff working in ports and on ships across Europe, she also held the lead for a highly complex transformation programme reaching across all areas of the Business.

A key focus for Sue and her Team was a continual improvement in the service delivery and customer experience for 3m freight units, 9m passengers and 2m tourist vehicles carried each year from over 30 locations across Europe.

Previously, Sue was Operations Director at London Luton Airport at a time of unprecedented growth following the launch of easyJet. Responsible for all landside and airside operations, it fell to her to put in place strategies for developing the airport at pace, in order to capitalise on that growth.

Sue’s early career was spent in the Army. She distinguished herself as the best student on her course at the Royal Military Academy Sandhurst and was subsequently appointed to a number of international leadership roles. During this time her responsibilities were broad and diverse and included tours on operations. Sue was the first female officer to serve with the Second Battalion Scots Guards.

After leaving the Army Sue spent time as Chief Executive of the charity Cities in Schools (CiS), which ran partnership programmes between business and the community to provide education to disadvantaged young people.

Sue has degrees in Agricultural Science and Emergency Planning Management and has completed the General Management Programme at Harvard Business School.

Sue is involved as a trustee / volunteer with several charities and in her spare time enjoys; travelling, skiing, diving and running with her dog.