Find a ServicePatients and PublicWork For UsGP And Clinicians AreaIn An Emergency
You are in:
Home/ News/ Parents speak about the ‘amazing’ care provided to their premature babies by the Oliver Fisher Baby Care Unit to mark World Prematurity Day 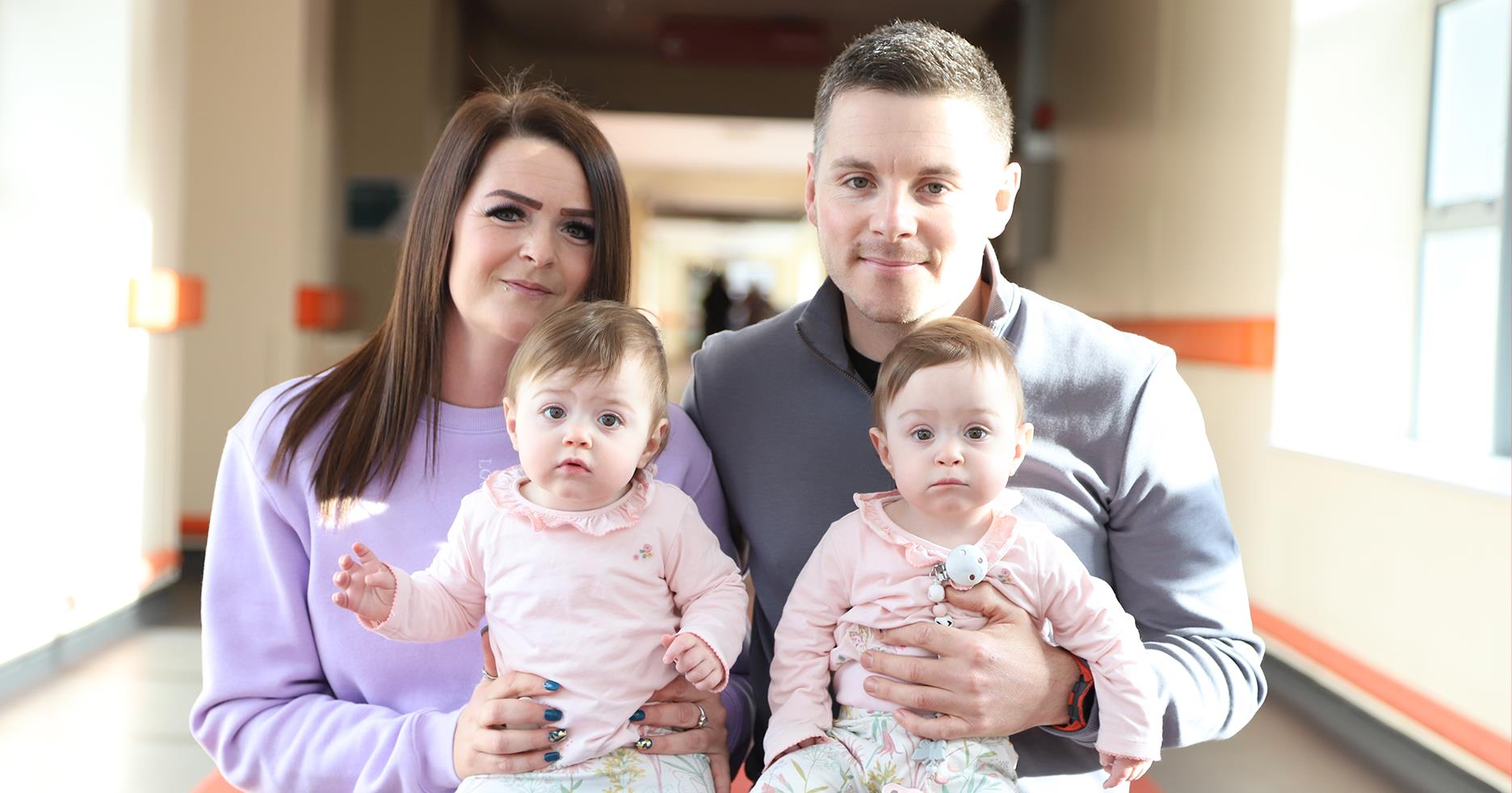 The parents of two sets of twins have spoken about the ‘amazing’ care provided by the Oliver Fisher Baby Care Unit at Medway Maritime Hospital, to mark World Prematurity Day (Wednesday 17 November).

Lauren Jewiss and her partner Paul Burr discovered they were expecting twin boys in October 2019. The pregnancy was going well until they had a scan at 19 weeks which revealed twin-to-twin transfusion syndrome (TTTS) - a rare pregnancy condition where the twins share one placenta and a network of blood vessels that supply oxygen and nutrients essential for development in the womb.

Six weeks after successfully undergoing surgery at King’s College Hospital to disconnect the blood vessels and effectively separate the shared placenta into two separate sections, one for each baby, the decision was taken to deliver the boys.

Zach, who weighed 1lb 9oz, and Jaxon, who weighed 1lb 3oz, were born at 25 weeks and two days on 25 March 2020. They were taken straight to the neonatal unit where they were placed on ventilators.

Miss Jewiss, from Hoo, Rochester, said: “Unfortunately on day three Zach wasn’t doing so well. The staff tried everything they possibly could but our little boy passed away in his daddy’s arms on 28 March 2020 at 12.13pm. We were taken to a side room where we was able to wash and dress our little boy. We wrapped him up in a blanket that Paul had when he was a baby, and put him in his moses basket. The day we left him we couldn’t see him again due to Covid restrictions.”

Jaxon continued to improve, and was putting on weight, but on 30 April 2020, the day before Zach’s funeral, he passed away in the arms of his parents.

The 33-year-old said: “We watched the staff resuscitate our little boy four times in the hope he would respond. Sadly he didn’t. As this was the day before Zach’s funeral we saw it as he couldn’t be without his brother and that was his last chance to go and be with him.

“All of this happened as Covid hit and restrictions were put in place, which meant the only time Paul and I saw our boys together was when they passed away.

“We could not see any of our family members to help us through their deaths due to Covid so we dealt with it at home together. We couldn’t even organise a proper funeral. It was the hardest thing we have ever had to deal with but the staff at the Oliver Fisher Baby Care Unit were amazing. They supported us every single day and did their upmost to help our babies and for that we will be forever grateful.”

Thirteen months after losing their sons the couple discovered they were expecting twin girls.

“I cried my eyes out as I kept thinking to myself ‘I cannot loose these babies’ and everything with the boys came flooding back. Safe to say we was both completely petrified and can honestly say we was not excited at the time,” said Lauren.

At 12 weeks the couple were told the smaller twin had a single umbilical artery and as the pregnancy progressed the baby would want more food to grow and due to the single umbilical artery it would not be possible. Then at 16 weeks they were told it would be ‘touch and go’ if the smaller twin would survive after a scan revealed there was hardly any fluid in the amniotic sac, something which is needed in order for a baby’s lungs to develop.

When Lauren started to experience pain and bleeding at 23 weeks, the couple were told they could lose one or both of the babies. As a result Lauren was put on bed rest in the hope of getting her to 28 weeks as the twins would have a higher chance of surviving.

Lauren, who is also mum to Louis 13, and Ava 10, said: “Walking through those doors felt like I had been sent back to 2020 when I last saw my boys. The staff were shocked that we were back with another set of twins. They couldn’t believe it.

“I cannot fault the level of care that was provided by the staff. Nothing was too much, and no question too stupid. Every nurse, doctor, and consultant went above and beyond for us and our girls. If it wasn’t for them we wouldn’t have them at home with us now.”

Annayah was on the unit for a total of six weeks, and Amariah eight weeks before going home on oxygen.

Lauren said: “It felt like such as big responsibility but the Neonatal Outreach Admission to Home (NOAH) Team* were amazing and talked us through it all. We also had home visits from the team, regular phone calls to check Amariah’s oxygen saturation levels and find out how she was coping. They were amazing.

“The day we walked out of that unit with both of our babies was so emotional. We were grateful for having our girls but it felt like we were leaving our boys all over again.

“There will never be enough thank yous to every member of staff that were on our journey with us from the boys, to the girls, to now. They will never understand how much they are appreciated by us and I’m sure so many other parents.

“People say to us ‘we do not know how you’ve done it’, but the simple answer is we had no choice. We stuck together through the good times and the bad. It may seem like we have our happy ending but there will forever be a hole in our hearts and lives where our little boys should be.”

Around 1,000 babies from Medway and the surrounding South East Thames region, including Dartford, Gravesend, Maidstone and Tunbridge Wells, are treated on the unit each year.

To help raise awareness of premature birth, and the impact it can have on families, Medway Maritime Hospital’s iconic clock tower will be lit up in purple from 5pm on Thursday 17 November to mark World Prematurity Day.